Once again we’re counting down!

When we design games, one of the most critical aspects of the design is the procession of the game.  When we are talking about learning, we tend to call it scaffolding, or increasing levels of difficulty.  In games we often use levels to depict the gradual increases in skill required to proceed within a game.  This study like Peter’s is an outstanding dissertation in the area of games.  This study also had several studies, and the results all culminated in some interesting finds about engagement in games.  The area that I was most interested in however, was the work that Sharek did in order to get to his main research points. 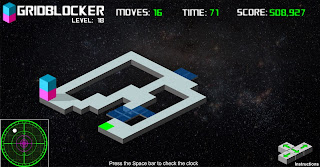 The study employed a game named Gridblocker, a tile based puzzle game in which a player must move blocks around until those blocks are placed on a goal space.  The game has many levels that represent puzzles of increasing complexity.  Sharek was interested in engagement, personal affect, cognitive load, and the amount of time a player engaged with a game.  In order to accomplish this he built 3 conditions into his study.  In the first condition players progressed through the game in a linear fashion, moving onto a higher level when the previous easier level was completed.  In the second condition the player had the choice of whether to move onto a harder level, or to play a level that was easier than or equally as challenging as the previous level completed.  The final condition leveraged an algorithm developed by Sharek which allowed the game to adapt to the player’s skill set, determining the difficulty of the upcoming level for them.

The participants in this study were recruited using Amazon, and included 340 adults.  While a preliminary analysis did not report significantly higher engagement, personal affect or decreased cognitive load for those in the choice based or adaptive conditions, the researcher performed a secondary analysis applying the adaptive algorithm to the choice and linear conditions.  The results were fascinating!  The secondary analysis indicated that players in the choice condition chose to play easier levels than they were capable of completing.  Additionally, players in the adaptive condition were able to achieve greater levels of difficulty than either the choice or the linear conditions in the same amount of time.

What does this mean to us?  Well, it means that our learners might not be challenging themselves enough when they are allowed to choose the level of difficulty.  It also implies that using an adaptive leveling strategy might allow players to get to harder levels faster than a linear model.  All good things to consider when trying to determine your own scaffolding/leveling strategy!