This is a continuation of several earlier posts, broken up to keep you awake while you’re reading!

#5 Influences of Game Quests on Pupils in Math Learning

When we think about quests, its easy to get all super geek and reference Dungeons and Dragons and those sorts of role playing games.  But quests are an important part of many games that we play today.  Video games like Call of Duty often call them missions, but the result is the same.  A quest uses a mini-story line, often inside a larger story line to give a player a sense of purpose and goals.  This study investigated the use of quests on math learning.

While I think the results of this study are quite interesting, I have to admit that the research was not the first thing to draw me to it.  It was the population being used.  We often hear about games initiatives in Science, Technology, Engineering and Math (STEM) geared towards US students who have fallen behind their international counterparts.  This study was designed and executed by a team of Taiwanese researchers, making it a fascinating find.  Taiwan?  Aren’t they great at math in Taiwan?  Yes.  Yes they are.  So why research a math game for students who are already great at math?  Because even though the Taiwanese students who participated in this study were high math performers, they reported low positive attitudes towards math learning.  Now isn’t that interesting?  That the reason for high performance in math may not be a motivational construct?  I thought so.

The game used in this study was designed specifically for this research.  It was titled “My-Pet-My-Quest” and was modeled after games that involve caring for adorable fuzzy creatures.  The researchers implemented a quest delivery mechanism to provide three elements: learning objectives, learning tasks, and rewards.  Each quest was related to goal orientation, and gave the students specific quests to accomplish.  The participants in this study included 53 4th grade students.  The researchers were interested in the influences of game quests on math learning in terms of the students’ perception of enjoyment and goal-pursuing.

The results of this study indicated that the quests did have a positive impact on the students.  Quests positively impacted the student’s perceptions of their experience including enjoyment, goal orientation and goal intensity.  The students who played the game with the quests also demonstrated more active participation and reported more enjoyable experiences.  The general conclusion was that quests whose goals align with learning objectives were favored by students.

When designing games for learning, its often very easy to think of a single layer game.  To create a story line and a linear experience.  This study shows that positive results can be elicited by using a more complex design that allows for quests and goals associated with those quests.  A great finding for anyone interested in implementing games!

If I were to ask you what makes a game a game, I would expect you to answer with a few archetypal game characteristics.  Score, challenge, competition, story, characters.  Those are typical responses.  While my list may differ in some ways, I’m always interested in how each characteristic might contribute uniquely to learning.  This study does just that!  This study (admittedly) is of particular interest to me because it was conducted as part of the dissertation requirement at my Alma matter by my best friend Peter Smith.  This game is additionally near and dear to me because it uses one of the games that Peter built for me in my role at DAU.  That game, Acquisition Proposition was designed to be a part of our casual games initiative, which allowed games to be developed that were based on the core learning objectives of the acquisition process.  This game models a typical resource management game in the style of a Diner Dash variety of game. 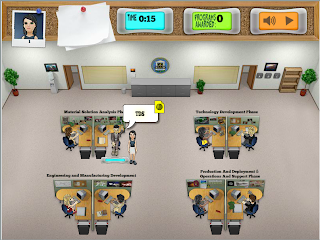 This study taps into some commonly held beliefs about cooperation and competition in games, and does much to inform us of how best to leverage games for learning!  Peter (or Dr. Smith as he requires that I call him) took Acquisition Proposition and modified it to be cooperative in which two players might work together or to be competitive in which two players competed against each other for a higher score.  (please note, he modified the infrastructure of the game to delivery it differently, he did not change the game or its learning objectives).  Peter recruited 160 undergraduate students and ran 3 experiments using the cooperative game, the competitive game, and a text based document of the content of the game.  Peter used pairs of students to play the game side by side.  His hypothesized focused on learning, motivation types, and player self efficacy.

Study 1 tested the results between the cooperative game pairs and the competitive game pairs, but provided the students with no particular instructions.

The results indicated that all players in all groups had significant learning increases (yay for Acquisition Proposition).  In Study 1 players within the cooperative game group reported a larger increase in intrinsic motivation.   Studies 2 & 3 elicited increases in intrinsic motivation for all groups, a surprise as it was expected that the intervention (gift card or told to compete) might elicit an extrinsic motivation in its players.  Additionally, winners of all competitive games reported higher self efficacy (their own feelings about their ability to learn) than losers.  Finally, winners of the game who received the gift card reported higher self efficacy than those in the cooperative games group within Study 3.

Deep stuff right?  Lets break it down.  Traditional cognitive theory would suggest that cooperative players would be intrinsically motivated (motivated to learn in order to be successful) and that players who were put into a competitive situation would be extrinsically motivated (motivated to win).  Additionally, it would be normal to expect losers of competitive games to have lower self efficacy.  While some of these results were found, their absence is just as informative.  I’ll write more about this topic later, but in the meantime, if you’re going to design a game, make sure you read this study and draw your own conclusions about its implication!!

Smith, P. A. (2012).  Cooperative Vs Competitive Goal Structures in Learning Games.  A Dissertation submitted to the University of Central Florida.