This is the to be continued of the Top 10 Research Findings in games posts!  If you’ve landed here without reading that post, I recommend you go back and take a peek at the evolution of the list and #10!

#9 The Relationship Between Video Game Use and a Performance Based Measure of Persistence.

Thomas Edison once said, “I haven’t failed.  I’ve found 10,000 ways that don’t work.”  I think that I have a lot in common with Mr. Edison in that respect, but, if nothing else I am persistent.  Not to say I’ve accomplished all that much, but I am not one to give up.  When we look at the ideal candidates for our jobs, we often think about what they already bring to the table.  What they have demonstrated they are capable of.  But, maybe we should be looking at how determined they are to learn what we are presenting them with.  Anyone who tackles complex problems fails.  Its inevitable.  But the desire to keep trying, the persistence of that individual is often the means to their success.

What does this have to do with games?  Turns out, quite a bit.  If we knew that playing games could increase our willingness to try and try again.  Our grittiness (as some researchers have called it).  Our persistence, this would be valuable.  Well, this piece of research has begun to investigate just this!

In their research, Ventura, Shute & Zhao investigated whether experience with video games was related to an increased ability to persist on a difficult task.  The authors additionally developed behavioral tests designed to improve upon self reported persistence.  When put to a test for validation of their behavior tests, they did find a small but significant relationship between the time committed towards solving a problem and a participants self reported persistence.  While this requires further validation testing, it does open the door to creating new methods for evaluating this interesting variable.

The findings of this research also found that participants who reported being game players dedicated more time to difficult problems.  This indicates that experience with video games did have a relationship with persistence.

Sounds minor right?  Well, its not.  This is the kind of research that I love to report on, its investigating the tip of the iceberg of what could be a major contributing factor to complex skill development!  Of course, further research is necessary to determine if this effect is transferable to other types of complex problems and to parse types of video games that these participants were referencing in their reports of play.  But still, great news!

#8 Learning to Stand in the Other’s Shoes.

What did your mom always tell you not to talk about at the dinner table?  Religion and politics right?  Well, chances are that your mom said that because these are topics that people identify with so deeply that virtually no level of ration or discussion will change their viewpoints.  But….what if you could provide someone with an experience that allowed them to see things from the other side?  What if you could allow them to make decisions and see the consequences of those decisions in a contextually relevant way? 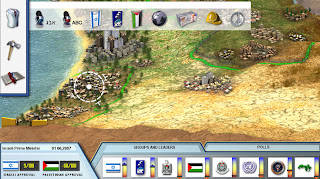 This is exactly what the researchers in this study accomplished by leveraging the game Peacemaker.  Developed by Impact Games, Peacemaker is a game that allows you to play a role on either side of the Israeli-Palestinian conflict. Within this game, you play either the Palestinian President or the Israeli Prime Minister.  There are varying levels of difficulty, and your goal is to create peace.

In this study Gonzalez, Saner & Eisenberg hypothesized that using the game would reduce the effects of religious views and political affiliations on decisions to reduce conflict.  They enlisted 42 undergraduates within a course on political topics.  The game was used twice within a semester with each participant playing each role twice.  The role they played first was randomly selected, as was the level of difficulty.

The results indicated that while peace was the goal of the game, most students did not achieve it.  They also found that the role a participant played did have an impact on the amount of time spent with the game, with the role of the Palestinian President yielding the higher time.  Most interestingly however, the Religious affiliation of the student was correlated with the attainment of peace in the first administration, but not in the second.  The same result was found for Political affiliation.  While this might have been additionally mitigated by the amount of time between the two administrations or even the content of the course; the results are powerful.  The use of an experiential game in this study was enough to impact the religious and political views of its players. That’s a big deal.